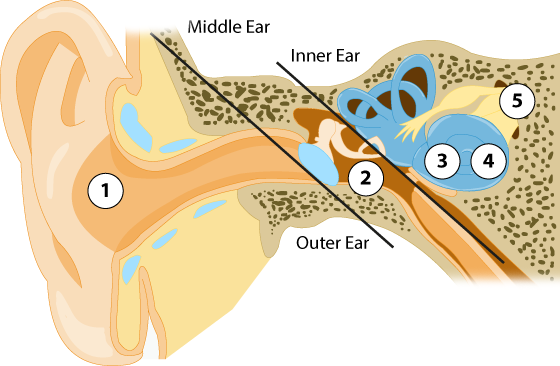 The part of the outer ear that we see is called the pinna, or auricle. The pinna, with its grooves and ridges, provides a natural volume boost for sounds in the 2000 to 3000 Hz frequency range, where we perceive many consonant sounds of speech.

The ear canal, also called the external auditory meatus, is the other important outer ear landmark. The ear canal is lined with only a few layers of skin and fine hair, and is a highly vascularized area. This means that there is an abundant flow of blood to the ear canal. Wax (cerumen) accumulates in the ear canal and serves as a protective barrier to the skin from bacteria and moisture. Ear wax is normal, unless it completely blocks the ear canal.

The eardrum, or tympanic membrane (TM), is the dividing structure between the outer and middle ear. Although it is an extremely thin membrane, the eardrum is made up of three layers to increase its strength.

The Eustachian tube is the middle ear’s air pressure equalizing system. The middle ear is encased in bone and does not associate with outside air except through the Eustachian tube. This tubular structure is normally closed, but it can be involuntarily opened by swallowing, yawning, or chewing. It can also be intentionally opened to equalize pressure in the ears, such as when flying in an airplane. When this happens, you might hear a soft popping sound.

The inner ear is an organ located deep within the temporal bone, which is the bone of the skull on both sides of the head above the outer ear. The inner ear has two main structures: the semicircular canals and the cochlea.

Hearing begins when the outer ear, the visible portion of the ear that is on the outside of the head, channels sound waves down the auditory canal. This tube-like passageway is lined with tiny hairs and small glands that produce ear wax.

The middle ear lies at the end of the auditory canal. It is composed of the eardrum and three small bones, known by the layman as the hammer, the anvil and the stirrup. When sound waves hit the eardrum, it vibrates and, in turn, moves the hammer. The hammer moves the anvil, which moves the stirrup, transmitting the vibrations into the inner ear. The middle ear functions to amplify sound, which is why significant hearing loss can result from any disruption in any of the parts.
The inner ear consists of the cochlea and the nerve of hearing. It converts sound waves into nerve impulses that travel to the brain via the movement of tiny hair cells. The brain, in turn, allows us to hear…as long as the message it is receiving is not distorted due to problems in the process just described.